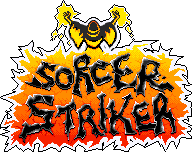 Sorcer Striker, known in Japan as Mahou Daisakusen (魔法大作戦, Magical Campaign) is a Shoot 'em Up game developed by Raizing and originally released in 1993 for Arcades. It is the first game in the Mahou trilogy, followed by Kingdom Grandprix and Dimahoo.

Sorcer Striker is a typical vertically-scrolling shoot 'em up, with one button for shooting and another for using screen-clearing bombs. Your main shot is powered up by coins dropped from flying bags, increasing the player's firepower by small increments.

During the stages players will also find the huge fairies who carry treasure chests. When shot they will drop magical books which will equip the player with options which add a secondary shot and can also be powered up by collecting books of the same color.

No one knows when it began. The mobilization of the Goblins gradually expanded, until they at last succeeded in establishing a single Empire of their own.

All this weighed heavy on the brow of King Cadwenner. He gathered all the loyal knights at hand and launched an attack on the Gobligan Empire, but it was a total disaster. All he managed to learn was that the Goblins were ruled by a single charismatic leader? A human no less? And that the development and mass production of magical weapons was well underway.

The King was shocked. Magical weapons, which used mana to operate, were known to exist. But no one had ever succeeded in reproducing them, and their full operation was limited and not well understood. What could the Goblins be plotting...?

The King foresaw the approaching doom of his kingdom. But the Order of Knights themselves had failed! After much internal debate, the King decided to place a tremendous bounty on the Gobligan King’s head.

Now he could only wait for a hero to arrive and save them all...

The game received a manga adaptation in 1994 published by Shinseishiya. It was officially endorsed by Raizing, who lent their design notes and sketches from the game for reference, some of which was included on the manga as a bonus. The manga retells the story of the game, elaborating on the characters and setting while taking a few artistic liberties with the story's structure.

Manga cover
Add a photo to this gallery

Retrieved from "https://eightingraizing.fandom.com/wiki/Sorcer_Striker?oldid=1238"
Community content is available under CC-BY-SA unless otherwise noted.