Kingdom Grandprix, known in Japan as Shippu Mahou Daisakusen (疾風魔法大作戦, Gale Magical Campaign) is a Shoot 'em Up/Racing hybrid game developed by Raizing and originally released in 1994 for Arcades and later ported to the Sega Saturn in 1996 by GAGA. It is the second game in the Mahou trilogy.

Kingdom Grandprix retains most of the gameplay elements from it's predecessor while incorporating racing aspects. By pressing the first button your character will fire it's main and secondary weapons, while holding it down will make it accelerate, with your character gaining more speed the closer it is to the top of the screen. Your objective is both to deal with enemies and bosses, as well as beating the competitor racers, with your total score being tallied up at the end of stages.

Due to the racing theme enemies don't cause collision damage, so you can choose to destroy them or ignore them altogether. The option subweapons return, but this time they're limited to the Frontal and Homing types. Aside of enemies you also have to deal with the other racers, who can't be hit by regular shots and can only be knocked back by using bombs.

The nightmare has gone away...

The "Gobligan War" which ravaged the continent ended with the death of their King. However, the looting of the remnants and opposition parties showed no signs of stopping, dropping a dark shadow onto people's lives...

As such, King Cadwenner noticed the raising public sentiment, deciding to do a big event commemorating the first year of their victory.

It is a big race without rules. The use of weapons is unlimited. Only the fast and strong ones can embrace the goddess of victory.

In the king's words "the winner will get anything he wishes", thus gathering all of the strongest people with their arms in the capital, carrying the city in a festive mood.

However, nobody noticed the two forces interfering in the situation...

After completing each stage you can choose between two (or three, in the case of the final stage) different stages. In order to see your character's ending you must score first in the general score tally. That will also unlock the game's second loop, where you'll play all stages skipped on the first loop. 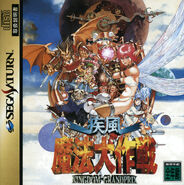 Saturn cover
Add a photo to this gallery