Ghoul Panic, known in Japan as Oh! Bakyuun (オーバキューン) is a lightgun game developed by Raizing and published by Namco, originally released in 1999 for Arcades and later ported to the PlayStation. This game is a spiritual successor to Namco's own Point Blank series.

Ghoul Panic is a simple gallery shooter game, where you must shoot the given targets on the screen. Your main targets are ghosts, skeletons and other monsters, with most missions requiring that you shoot a specific number of enemies. Later missions introduce targets you must avoid shooting, such as the cats which you must protect and bomb-shaped monsters. The Arcade game is played with a lightgun, while the PlayStation port can be played with the regular joystick (in which case you control a reticule for targeting) or the Namco GunCon.

You can pick between three difficulty levels, with Practice being only 6 stages long, while on Medium and Advanced you play through all stages. The game features various mission types: 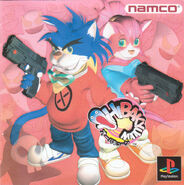 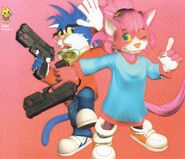 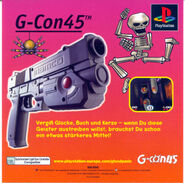 GunCon ad
Add a photo to this gallery

Retrieved from "https://eightingraizing.fandom.com/wiki/Ghoul_Panic?oldid=971"
Community content is available under CC-BY-SA unless otherwise noted.