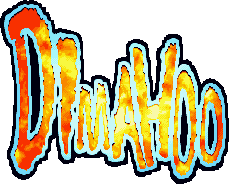 Dimahoo, known in Japan as Great Mahou Daisakusen (疾風魔法大作戦, Great Magical Campaign) is a Shoot 'em Up game developed by Raizing and originally released in 2000 for the CPS-2 Arcade platform. It is the last game in the Mahou trilogy, never receiving any console ports.

Dimahoo brings back most of the gameplay systems from Sorcer Striker while adding some new ones. All of the characters in have a machine gun style shot, their own special bomb attack which ultimately makes them invincible for a second, and an individual personal attack. The personalized charge attack can be used once the magic book icon is collected. This then adds two options to the players ship. After holding down the fire button, the charge burst becomes armed and then the character turns from red to blue. If the player releases the button while the character is red, then the attack will be more effective towards blue enemies. Likewise, when the character is blue, it will be particularly damaging to the red enemies. The weapons that are fired from the options also change from red to blue. When the bullets hit enemies with the same color, it will neutralize them.

When enemies are destroyed by the charge attack, they drop their armor, sword, shield, food, boots, helmets, jewelry, or special items. These items each have point values and can be collected for extra points, greatly adding up to the player's own overall score. There are a total of 108 items for the player to collect, with a few of them being completely hidden and that special requirements must be met and initiated by the player in order to gain and achieve said items.

The player can also collect yellow diamonds in order to fill up the point meter. Once the meter fills up completely, the sound of a chime will go off. A treasure chest with an extra bomb will appear for the player to collect. Once the point meter is filled up, it will reset to zero.

It came from the ground.

It's been 50 years since the end of the "Fighter War" involving the entire continent. The goblins who lost their king avoided the eyes of makind and rebuilt their kingdom at the bottom of Earth.

And the time came. The surface people were helpless against the sudden attack from underground. The peace which seemed to last forever, suddenly came to an end.

Free to leave the underground, there was no way of fighting the invaders, so the people just decided to flee for their lives.

The young King Anktil, seriously assessing the situation after concluding an alliance between the terrestrial states and forming the Kingdom Knights, set a large prize money for the underground goblins and spread the order through the whole continent.

Now, all prayers go to the legendary four brave men...

In order to unlock the secret ships, you must input the following sequence at the title screen after inserting a credit: Up(x2), Left, Down(x2), Right, A, B, A, B, A, Start.

♪ ELEMENT IN THE STORY
Retrieved from "https://eightingraizing.fandom.com/wiki/Dimahoo?oldid=1506"
Community content is available under CC-BY-SA unless otherwise noted.