Bloody Roar 2 brings back the same gameplay systems from it's predecessor, with little changes. The only major addition to the gameplay was the new Beast Drive moves, which replace the Rave mode from the first game. These are basically Hyper moves, which can only be executed while in Beast Mode and will automatically revert the player to Human form regardless if it connected or not. If the move connects, the character will perform a devastating combo on the opponent.

The collapse of Tylon, Inc. results in spreading news of Zoanthropes' existence to the whole world. The Zoanthropes, who have such high battle capabilities now attract curious eyes of people who did not know the situation. And then, the worst situation is being formed that Zoanthropes are discriminated only because they are different from human beings, and that sometimes even their freedom is seized by the national power.

Many Zoanthropes hide their capabilities under such a situation, and they are obliged to live reclusively. However, some Zoanthropes who dislike to compromise with being discriminated organize the "Zoanthropes' Release Battle Line" and try to improve the present condition by power, standing up against the national power, society, and human beings itself. The Release Battle Line immediately succeeds to establish their dominant region with Zoanthropes' battle capability. Hatred overshadows Zoanthropes and humans, and the deep rift arises between the two.

Love, revenge, belief, and desire - While various thoughts are interwoven, the Zoanthropes who fought with Tylon once also cannot help facing with this dangerous crisis. Those who have realized the necessity of the mutual understanding and reconciliation between Zoanthropes and humans decide to make an advancing step towards coexistence slowly but certainly to create a new period. 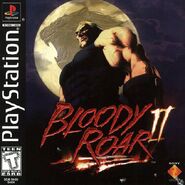 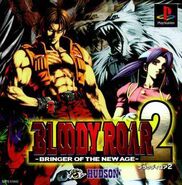 Japanese cover
Add a photo to this gallery

Retrieved from "https://eightingraizing.fandom.com/wiki/Bloody_Roar_2?oldid=1513"
Community content is available under CC-BY-SA unless otherwise noted.