Bloody Roar is a one-on-one 3D fighting game, similar to Tekken and Virtua Fighter, with characters fighting on a three-dimensional arena. The game only has a button for punches and one for kicking, with combos being done by pressing the attack buttons in a specific order and special moves executed by doing simple direction+button combinations.

The main gameplay mechanic of Bloody Roar involves the Beast Gauge. Below the character's lifebar is a second gauge, which fills up when executing moves. Once enough of it is filled, the word "BEAST" will flash over it, allowing the player to transform into it's Beast Form by pressing a third button. While in Beast Mode, the character becomes stronger and gets access to more special moves, while the Beast Gauge starts depleting whenever the player sustains damage. Once the gauge is emptied, the character returns to Normal Mode. While in Beast Mode the player can also activate a "Rave" mode by pressing a fourth button, making the character much faster and eliminating recovery time between moves at the cost of the entire Beast Gauge, which is completely depleted.

This is a story in the future, not so long from now...

It is discovered there are mysterious people who have capability to transform themselves into a beast figure. "Something mysterious which has been latent in their genes", related to the formation of figure and capability of various animals, awakes one day suddenly due to anomalies. They are called "Zoanthropes," but few people know their extraordinary potentialities.

Under such circumstances, some researchers have found that almost all of us equally have the gene in fact that could "beastorize" ourselves. A special information code is contained in this gene, and this information code is called trigger gene. It is considered that only those whose trigger has been activated can transform into a Zoanthrope.

It was Tylon, Inc., a multinational company that planned conquering world using military force and technologies, and they were aware of the Zoanthropes' extraordinary power, about which a few scientists had been studying. Tylon schemes utilization of Zoanthropes' powerful capabilities for military purpose, and captures many of them as the subjects of the experiment. Furthermore, Tylon intends to brainwash and modify them to make them the fighting forces.

However, Tylon's plot that is going to abuse Zoanthropes is smashed by the counterattack by gallant Zoanthropes who fight risking their lives. Tylon's evil deed is exposed to the world, and many Zoanthropes who are captured regain the freedom. 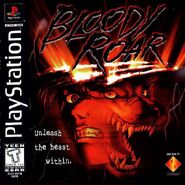 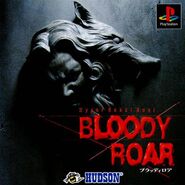 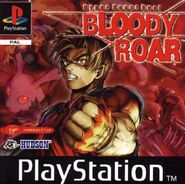 European cover
Add a photo to this gallery

Retrieved from "https://eightingraizing.fandom.com/wiki/Bloody_Roar?oldid=1512"
Community content is available under CC-BY-SA unless otherwise noted.