Battle Garegga is a Shoot 'em Up game developed by Raizing and originally released in 1996 for Arcades. It was ported to the Sega Saturn in 1998 by Electronic Arts and to the PlayStation 4 and XBox ONE in 2017 by M2.

While the game never received direct sequels, it was followed by Battle Bakraid as a spiritual successor.

Bombs work differently from most shmups, in that you find small Bomb icons scattered around the stages, often dropped by ground-based enemies. Picking up these will raise your bomb power, which is then upgraded into a full bomb after collecting a certain amount. When you press the bomb button you'll consume a full bomb as long as you have one in stock, otherwise you'll consume from the bomb meter for a weaker effect.

By picking up a Option item your ship is equipped with a option drone for extra firepower, for a maximum of four options. By pressing the corresponding button you can change the formation of your ship's options, with five basic formations available normally.

There are also secret formations, which are activated when you fulfill certain requirements. These requirements are based on missing a certain number and type of item BEFORE you pick up the next available Option icon.

Battle Garegga introduces a dynamic difficulty system known as Rank System, which would be used in all subsequent Raizing titles. Based on how well you play, the game automatically adjusts the difficulty, becoming tougher the better you play. The game constantly keeps track how many items are picked, how much powered up the player's ship is and even how many shots are fired, increasing the difficulty accordingly. The only way to decrease the rank is by losing a life. Thus, the game forces conservative gameplay, not powerering yourself up too much too fast, not firing when there's nothing to hit and even not destroying some enemies, as well as losing lives on purpose, all in order to keep the rank low enough to make the game's difficulty manageable.

Scoring is a fundamental part of the game, since you obtain a extra life every 1000000 points. In Battle Garegga you can obtain score by destroying enemies or shooting solid objects, like the invulnerable parts of large enemies and bosses. The main method of scoring however involves the medal items: each time you pick up a medal item the next one will come with a higher value, their value increasing for as long as you can keep catching them, up to a maximum of 10000 points. If you miss a medal their value is reset. Medals are occasionally dropped by destroyed enemies, but can also be found by bombing specific parts of the scenery.

The medal values are as follows:

Battle Garegga was ported to the Sega Saturn in 1998. Due to the Saturn's lower resolution this version plays on a compressed screen by default, though you can change the screen type on the options, allowing to set it to a shrunken mode or tilted mode. You can also change the type of enemy bullets and unlock the Sorcer Striker ships without having to input a code, as well as pick between various difficulty modes. This version comes with a new arranged soundtrack, allowing you to change between it and the original Arcade soundtracks.

Battle Garegga was ported to the PlayStation 4 and Xbox One in 2016 by M2. This version, entitled Battle Garegga Rev. 2016, includes all options previously available in the Saturn Port. New to this version is the addition of gadgets, information panels which the player can put on the sides of the screen and customize to its liking. These allow the player to keep track of score, button configuration, ship stock, boss stamina and timer, etc. One of those gadgets allows the player to watch the game's internal rank in real time, which is displayed as a graph.

Besides the original Arcade mode, this version includes new Super Easy and Premium modes with difficulty settings adjusted for beginners and veterans respectively. This version also include options to change the color of enemy bullets, lock rank at a certain level threshold or disable it entirely. The Arcade and Saturn soundtracks are included along with a remastered Arcade score and a new remixed soundtrack with music from the Battle Garegga Complete Soundtrack album.

Mathew Wayne, a resident of a small country town, was a mechanical genius whose aptitude and skills were passed down to his sons, Brian and Jason. After gaining leadership of his automobile factory from him, the brothers' skills became renowned throughout the country. Eventually, the Federation approached the brothers with an extremely profitable contract to help produce military vehicles for it. The Wayne brothers accepted the contract, and created weapons without peer.

A short time later, the skies turned dark with the Federation's encroaching airfleet, and towns and cities everywhere were ravaged by these armies—including Brian and Jason's home town. To their horror, the Federation was using the weapons and vehicles they themselves had designed to reshape the land to their pitiless will. Taking up planes whose designs had never been submitted to the Federation, the Wayne brothers prepare to destroy the Federation's mad scheme.

In order to unlock the Sorcer Striker ships, you must input the following sequence at the title screen after inserting a credit: Up(x2), Down(x2), Left, Right, Left, Right, A, B, C, Start.

NOTE: Stages 4 and 5 are reversed in the international revisions of the game. 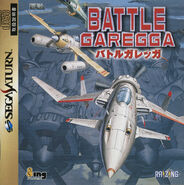 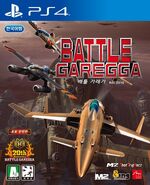 PlayStation 4 cover
Add a photo to this gallery